This journey began when my father-in-law found these drums in someone’s trash on the side of the road. I didn’t know much about the history of Japanese drums at the time, so this project was a real learning experience. 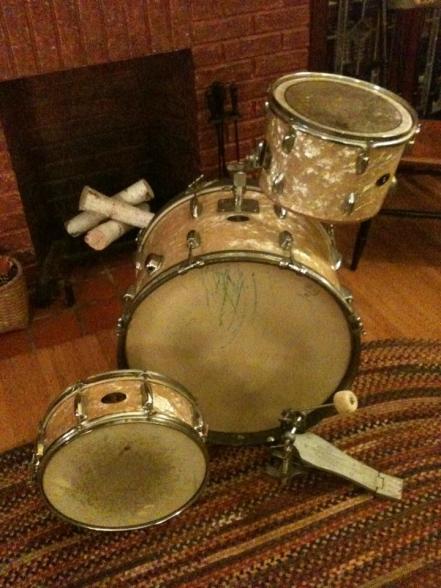 Here is how they looked when I got them. The 12″ tom shell had extra holes drilled in it, the tom mount was cobbled together from an old mic stand, and the snare muffler had cracked right through the shell.

But aside from the missing resonant head, hoop, and tension rods (all the rage in the 70’s) everything else was complete.

After scouring Craigslist for a few months I found a set of WMP Japanese toms mixed in with a pile of other drum stuff. But… someone else bought the lot before I had a chance. I emailed the seller and begged him to put me in touch with the purchaser, on the off chance he had wanted something else in the pile. I’m sure I came across like some kind of CL lunatic, but the purchaser agreed to sell me the 12″, 13″, and 16″ toms for $50!

These toms had “St. George” badges and die cast hoops, but they were clearly made by “Star” who also made the U.S. Mercurys. (As you may know, Star later became TAMA). After fixing 2 damaged shells, replacing missing parts, and repairing damaged wrap with pieces from the extra 12″ tom, I polished all the metal down to each screw head and washer. The result is a fantastic sounding kit that always draws tons of interest and compliments!

Here they are at a recent gig in a 4-piece configuration with a modern aluminum snare, and during an impromptu living room jam.